Wedding season is in full swing and it is high time you, dear readers and future newlyweds, took a closer look at my new wedding photography in Prague. In this post we are speaking about people who come to the Czech Republic in April to get a photo shooting and to spend their engagement in Europe. This year there are a lot of couples from Russia, but Prague becomes more and more popular with lovers from Asia: China, Singapore and Macau. The latter can’t but admire every stone on the pavement and are willing to be photographed against a background of every building and monument. The matter is that most of them live in megalopolises with the times where there’s no place for historical and mono-functional buildings. This is the reason why the Czech Republic and other European countries appeals so much to honeymooners and lovers from Asia. They like to celebrate their engagement in Prague and arrange a photo shoot in wedding dresses a few months and sometimes even a year before the official wedding ceremony so that beautiful photos are ready before the great moment. For example, Russian couples tend to combine such a photo shoot with their honeymoon while the newly-married couples from America and Britain have no specific date. So everyone is his own master. Angela and Lin flew in to spend their honeymoon in Europe from distant Hong Kong. To be more precise, only Angela flew in as Lin works as an engineer at the car factory “Volkswagen” in Wolfsburg. So he enjoyed the trip to the full. What can be better than driving your own car on the German Autobahn and dreaming of a meeting with your soulmate in one of the most beautiful cities in Europe – won’t you feel really happy? All this took place in spring which kept on surprising us: it teased us with the warm weather, then threw us into contrast sprays and in addition to these sprinkled with snow. It was the beginning of April and during our photo shoot we met with small hail, snow, tremendously beautiful clouds, a stormy wind and the cloudless blue sky. It’s typical of the rain in Prague to stop, and in most cases it happens in 15 minutes. Having made more than 300 photo shoots I was “lucky” to work in the rain only once or twice, so I to take the weather in my stride. It’s quite another matter with brides — 99.9 per cent of them torture themselves worrying about the weather — what if it starts raining? It’s not a problem! I keep saying over and over again that you should never worry about the weather. It would cost millions of dollars to imitate such weather and lighting effects in a studio. In our case the scenery changed every 30 minutes and it was free of charge — it is a dream of every photographer! In most cases the pre-wedding photography in Prague for couples from Asia is divided at least into two parts. All depends on the amount of clothes they take with them. Girls usually take two dresses with them: a white wedding dress and a beautiful evening gown. Angela and Lin were no exception.

Vysehrad Castle is one of the most interesting places in Prague. You can get there without any problem as there’s the station of the same name Vysehrad on the red line of the Prague Metro. This monument of the Middle Ages is considered to be one of the most impressive sights of Prague. Unfortunately, in spite of its importance and beauty, most visitors of the city pass Visegrad by. It’s probably can be explained by the fact that in the center of the Czech capital offers a lot of places which are worth seeing too. It’s impossible to visit a great number of the places of interest in Prague in one trip. We killed two birds with one stone: we enjoyed walking about these sights of Prague and managed to catch weather conditions which only emphasized the beauty of our couple and of the their harmony with gothic and medieval facades. Angela and Lin were really impressed by the views of Prague, they couldn’t imagine that a simple cloudy morning in Prague can be so beautiful. In fact, the weather served our needs as the streets stayed empty long after the day had started. Some couples strolling in Vysegrad could not prevent us from doing interesting pre-wedding photography in Prague. Being a wedding photographer in Prague, I started the second day early in the morning as usual while the city was still sleeping. This is a magical time when you can plunge into creativity. The flight of fancy, emotions and unspeakable beauty of my couple allowed me to open the chakras and create. Each photo had its own mood! During the training at the photography school beginners and colleagues always ask me — how do manage to get such colours and catch famous places almost or completely empty? The answer to this question is obvious — sleep less. Having enjoyed the first hours of a new day, Angela, Lin and I ran along Mala Strana and headed for the most favourite place of all the lovers in Prague – the Charles Bridge. Charles Bridge – the most romantic place for kissing

Any famous model can be envy of the very old bridge in Prague. Each day the Charles Bridge attracts millions of people: both tourists and the citizens can’t help admiring the beauty and harmony of this bridge. Its history is full of legends and myths. According to one of them, a kiss on the Charles Bridge will be the sweetest in your life. Ready to check it at your engagement in Prague? Welcome! Although it’s the early morning, the Charles Bridge lives already his own life. Someone is in a hurry to work, others walk along the statues that are looking at you from the height of several meters. The most famous sculpture on the Bridge is dedicated to John of Nepomuk, who, under pain of death, didn’t betrayed his oath and didn’t disclose the secrets of the confession. For this he paid with his own life. That’s why now he is considered the patron of all lovers. People from all over the world walking along the Charles Bridge stop to make a wish. We met such a beautiful morning on the Charles Bridge. In fact, to say that Prague is a very romantic city is buttery butter. I draw your attention to this part of our pre-wedding photography in Prague on purpose. In Prague as in other city there are unique places where you can really throw yourself into romance. Kampa quay is among them. Early in the morning you can feed  swans here and meet a new day enjoying the view of the Charles Bridge. The citizens of Prague treat swans in a special way. In my childhood in Brest I always used to come across the ads at the quay saying not to feed these white birds as they could get used to it and wouldn’t be willing to fly to the warm countries for winter. Everything is different in the Czech capital. In several places, you can find an ad written in the first person in 3 languages, including Russian, which tells how good the swans are and what they prefer to eat. Personally, I’m for regular meals of these wonderful birds and the samples of loyalty, which perfectly complement the romantic views of the Charles Bridge and the Old Town.

Views of the city

It goes without saying that we can get the best view of any city from the hills. Panoramas are always impressive and breathtaking, and in Prague they are also complemented by authentic red roofs. Any citizen of a large modern metropolis whether it’s Hong Kong, Moscow or New York can’t stay indifferent when the whole old town with its small streets, red roofs, bridges and trams lie open before him. Prague Castle is one of the best observation decks with the most impressive views. If you go up the hill a bit earlier but not along a beaten track you take a chance to become the only observer in this place, and Prague will be for you and only for you. We did this as you have already noticed and seen it in the photos of Angela and Lin. Mala Strana, Petrin Hill, the Vltava and Prague’s bridges are below us! Having seen this beautiful couple, despite all the forecasts the weather brightened us with warm and so rare in Prague spring sun rays. That was Angela and Lin’s April engagement shooting in Prague. Do like the style of the pictures you could get from a professional wedding photographer in Prague? 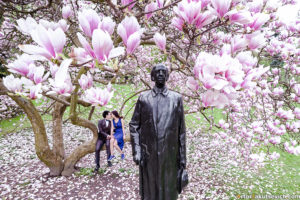 Spring photo shooting in Prague with Sukie and Wilson 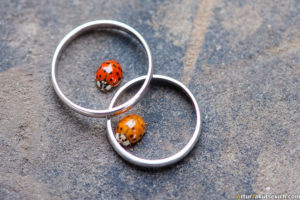 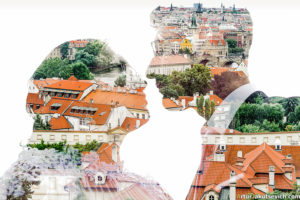 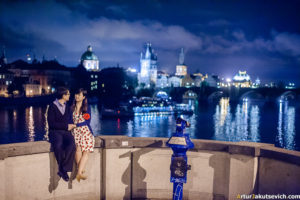 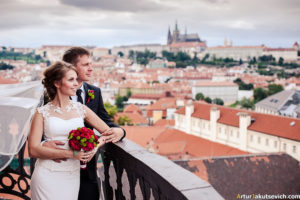