For recent 3 years I’ve been experiencing real cultural diversity being involved into different family events. Every single couple is unique and has its own vision of how the things run, whether it is an engagement in Rome or a wedding in Naples. What I usually do, but for taking photos and enjoying something new, I do analyse and compare cultural peculiarities of different countries.

Eimear and Willy our heroes of the day came to Italy to get married. Their big day was held in a villa near Italian capital, therefore they decided not to miss such an opportunity to have a morning engagement photo session with a professional photographer in Rome. For example, I came to the conclusion that couples from Eastern Europe get married earlier and the once from the West. Average age of most brides in Russia or Belarus (my native country) is about 20-25. When British couples spent together from 5 to 10 years with no stamps in passport and closer to 30 they get married. To my mind it is normal to choose any variant among possible once. I’m not convincing anyone to take this or that side, just giving a fact. By the way my new Irish friends had been engaged for 15 years, before their wedding in Italy. So, this is another proof of my theory about the age of brides and grooms in different parts of the world. But, let me tell you the story of that summer day. The first meeting with the couple we usually have before the shooting in a restaurant to taste good Italian cuisine and of course to discuss the photo session. With Eimear and her groom the situation was a bit different. They stayed 30 kilometres from Rome in a villa and the day before we met they were meeting the guests and preparing the event together with the weeding planner. Therefore we could not meet in advance and arranged to start the shooting from the central railway station Termini in Rome.

To my mind it was a good idea since Rome is very fascinating in any part of it, thus me as a engagement and wedding photographer had only to know the preferences of the couple and to make the plan of our morning in Rome. The first lovely pictures we made at the fountain near Termini station in Rome. That amazing May morning were we there alone. At the Piazza del Republica there is a fountain called Fontatna dele Naiadi. This one we could not miss. The following place was also closely linked with water. The crossing of the Via dele Quattro Fontanne and Via del Quirinale is know as a crossing of four fountains. It was designed and constructed in 1588 – 1593. Two statues symbolise Tiber river that flows in Rome, Arno  river, that flows in Florence. Two other — goddess Diana and Juno. On our way from the four fountains crossing to Spanish Steps we dropped into Barberry Palace. Usually occupied by thousands of tourists it was open and we were the only once walking around and catching nice moments and amazing light. But to tell the truth there was another were interesting alive object — a cat. It patiently observed us taking engagement photos and then left. One of the best panoramic views in Rome opens from Spanish steps. My readers and friends photographers would always ask me how I manage to capture the most attractive place without tourists. My answer — early bird catches the worm. Together with the couple we sacrifice several hours of our sweet morning sleeping and set off for a pre-wedding photo shooting in Rome really early. Thus we can enjoy unique atmosphere of the city and see no people in the streets. We have space and have time to enjoy every interesting view and location. Spanish steps was constructed in 1725 according to the project of unknown architect Francesco de Sanctis. The construction consists of 138 steps stretching from the Spanish square to Trinita dei Monti church. Just round the corner there is a famous shopping street Via del Condotti. Though every girl like wondering around exclusive items in boutiques, Eimear agreed to follow the other street that lead us somewhere further. Any building or construction somehow linked to Vatican is amazing and generates lovely composition. To my mind it is not just a coincidence. Academy of Vatican is one of such interesting buildings attracting with its beauty not only the future priests, but also us, people making engagement photos in Rome. When I was editing the these pre-wedding pictures, I realised that the whole theme of the shooting was about love and light. We met the LIGHT in Termini station and it followed us further. Another amazing composition we found in Pantheon one of top 10 attractions in Rome.

It is a well-know fact that summer in Rome is sometimes unbearable. The sun burns like in hell and the only place to hide is the shadow. From my personal experience there are several variants of where to find shelter either to go to a park or to the old town with its tiny streets. There are thousands of trees in numerous parks of the city which spread shadow and collect fresh air. What concerns the old tiny streets, there are a lot of springs with crystal and very fresh water. It is cold and tasty. Step by step together with Eimear and Willy we approached the final point in our plan —Vatican. As usually I make hear a photo for good memory.  It was a very interesting morning. We saw Rome in the beginning of the day with it’s beauty and magic atmosphere and of course we managed to make lovely engagement and pre wedding story in photos from Italian capital. But before we said good bye to each other, Eimear asked me if there was any chance to have some photos with Coliseum. Of course we could! To save our time we took a taxi that was about 15 Euros and went to one of the most popular attractions of Rome. I would like to thank my new British friends for an amazing morning we spent together in May and for a fascinating pre-wedding photo shooting in Rome. From my point of view the your engagement photography in Italy is a bright example of true love! Honeymoon in Italy: Daphne and Garry 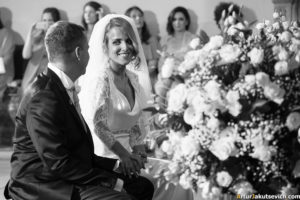